I’m writing from Israel this week, where I am visiting a number of archaeological sites. Yesterday Avi Gopher and Ran Barkai generously gave me a tour of Qesem Cave. The cave has produced a remarkable series of discoveries about the behavior of late Lower Paleolithic people here in the Levant, between around 450 thousand and 200 thousand years ago. I’ll share more about the site later, but I wanted to get a picture up: 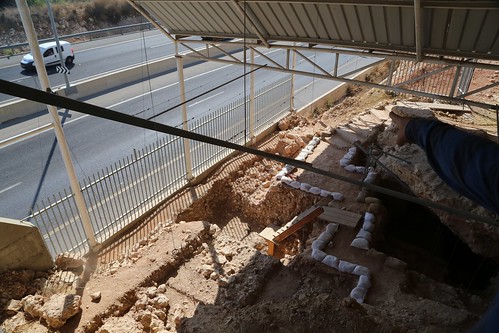 Qesem was discovered during road work, and was rescued quickly after blasting uncovered the brecciated deposits of tools and animal bones. The road was moved slightly, but was still built, now a four-lane expressway buzzing constantly next to the archaeological remains. It was very loud, so I didn’t get any filming done there, but I took some amazing photos and got the stories of both recent and ongoing discoveries. It is an exceptionally rich archaeological deposit with a high density of stone tools, including thousands of very early blades.

I can’t wait to share more, but now I’m off for the afternoon’s activities.