I had the neat experience yesterday of talking to a class about scientific illustration, from my point of view as a scientist who does a lot of illustrating my own work. 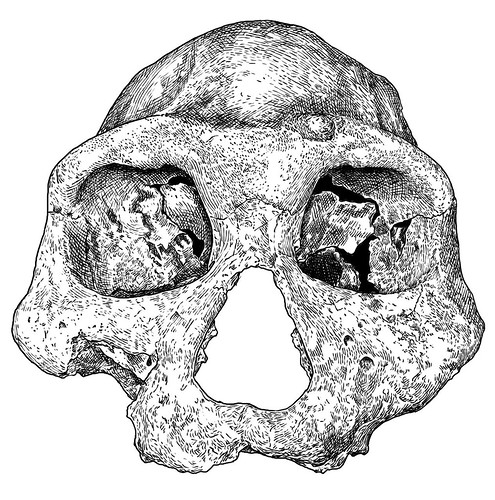 The students’ questions ranged widely. Some were very technical – what tools do I use, why do I hatch in a particular style? Others were more conceptual – how do artists put flesh onto bones in their reconstructions?

In that light, Carl Zimmer has a nice article in the Science Times today about the work of artist reconstructors of fossils: “Artists Mine Scientific Clues to Paint Intricate Portraits of the Past”. I get asked about artist reconstructions every so often – “How accurate are they? Are they scientific? Are they just made up?”

Zimmer discusses many kinds of fossils, from dinosaurs to humans. For ancient humans, one new aspect is that we have details from their genomes about possible phenotypes, based on associations in living human populations. This came into play for the reconstruction of the “Paleo-Eskimo” individual whose genome was published in Nature last month:

Mr. Godtfredsens picture is plausible, rather than photographic. Its impossible to pick out an individual from a police lineup based on nothing but a genome. Dark hair, brown eyes and a stocky build could describe thousands of people who live in the Arctic today. Its also important to bear in mind that genes rarely guarantee any particular traits; instead, they tend to be associated with them. So we cant know for sure that having a so-called baldness gene meant that Inuk actually ended up bald. Its certainly possible that he died too soon to find out.

Mr. Matternes worked for years with the scientists on his reconstruction of Ardipithecus. First he drew its skeleton. Onto the skeleton he added muscles, and finally skin and hair. Mr. Matternes infused the picture with a deep artistic understanding of anatomy. But it is also a scientific hypothesis.

This is the point I try to emphasize – an artistic reconstruction is a hypothesis. It is communicated visually, unlike hypotheses that are expressed verbally or mathematically. Elements of it are testable – they can be refuted by making further observations. I was explaining this to my introductory anthropology students yesterday as well – that Matternes reconstruction of Ardi is a hypothesis about posture and locomotor mode. Looking at the reconstruction helps to frame further tests of that hypothesis in a way that complements the verbal description of the anatomy, although it doesn’t supersede or substitute for the anatomical description.

But there is another aspect to the artistic representation of fossils: It conveys the reality of the objects. 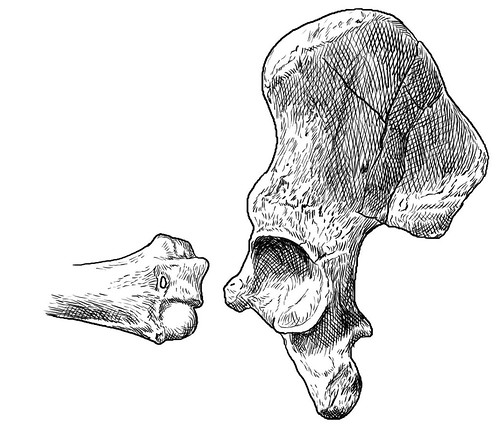 I find that these two aspects of artistic representation are in tension.

Clearly communicating about the anatomy of a fossil requires a representation that highlights some anatomical aspects and glosses those that are irrelevant. Having the experience of the reality of an object requires a different kind of representation. On a surface level, for example, one may consider that fossils are broken and discolored in various ways. A true-to-life rendering of the discolorations will accurately convey something about the objects, but may obfuscate the anatomy. The very act of representing a fossil in a way that corrects for breakage and distortion is a kind of reconstruction – a kind of hypothesis, in other words. It conveys information about the way the artist or scientist conceives of the object’s relation to other objects.

Likewise, an artist’s fleshed-out reconstruction of a fossil skull communicates the artist’s hypothesis about the relation of the skull to ancient flesh and the living flesh that the artist knows through study and observation. It obfuscates some details of the fossil, and highlights others.

All art has this tension. We understand that an artistic representation of a living person is a kind of fiction – it can never capture the person herself, only some aspect of the person. It may exaggerate some and gloss others.

So it is natural for some viewers to see an artistic representation of a fossil with suspicion. The agency of the artist is apparent, and we may not trust that the artist is an appropriately skeptical observer. When we look at multiple reconstructions of the same fossil, the power of convention is apparent.

Just think – how many reconstructions of Neandertals have you seen in the last few years that weren’t red-headed? Gurche’s new one isn’t, but almost all have been. The red-headed Neandertal clearly conveys the information about the genomics of MC1R, and yet the color itself is just a hypothesis. As I discussed upon the discovery, even if the variant has the postulated functional effect on melanocortin reception by melanocytes, there may well have been modifier genes that made Neandertal hair blonde. The convention of the red-headed Neandertal follows the needs of museums and textbook authors, all of whom need to tell the story about genetics. But in that sense, it’s rather like the convention of a bearded Jesus – making the Neandertal iconic triggers our recognition, but may subtract the need to scrutinize closely, to experience the form anew.

I have some more to write about this topic, using Jay Matternes’ Ardi reconstruction as case study – so check back later!

UPDATE (2010-03-24): I’m reminded of a post from last year, “Paleo-artists in the spotlight”, which pointed to a well-illustrated Michael Balter profile of several artists in Science last July.