OK, for an anthropologist you have to imagine this is more cheerful than it sounds.

After walking the flea market at Porta Portese, I ran to the gate of the old Protestant Cemetery to get there before it closed. Back in the days when the entire city was ruled by the Popes, non-Catholics were forbidden to be buried on sacred ground. Foreigners who died in Rome were brought to be buried here near the city’s outskirts. By the nineteenth century, this spot near the pyramid had become a formal graveyard.

Oh, did I mention a pyramid? 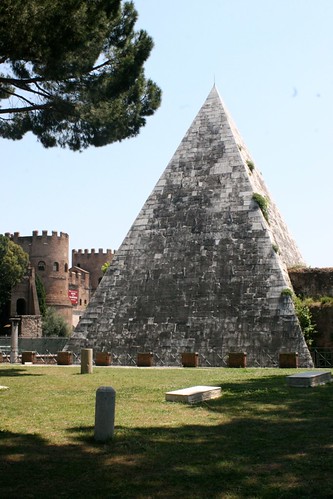 It’s the Pyramid of Cestius, built as a tomb in the first century B.C. Later builders integrated it into the city wall, and here it is in the border to the Protestant Cemetery.

I arrived there a minute after the gate closed. Rats!

My strategy in such a situation is to stand around with a pleasant look on my face. It soon paid off. The caretaker seemed a pleasant young man who looked about like what you’d expect a twentysomething poetry student to look, and he invited me in for a few minutes.

So I went inside and gravely met the stones. 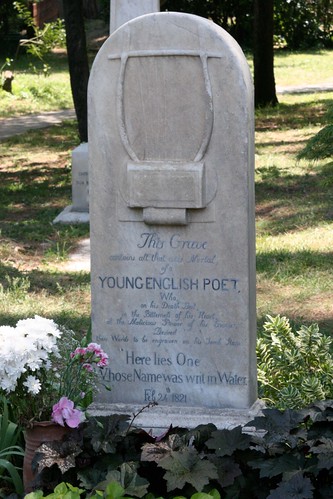 John Keats died in Rome in 1821 at the age of 25. He had gone there for the climate, hoped to relieve his suffering from tuberculosis, which had stricken him severely the previous year. His entire family, mother, brothers and sister, were drained by the disease. A life of such tragedy, orphaned by disease, nursing the final year of his teenage younger brother’s life, then bled and starved by quack doctors. He loved a young woman, and she loved him, but he had no prospects, no money, and he fell ill. His letters to her survive, half a dialogue after he willed her side to be destroyed. Keats’ life ended in a house next to the Spanish Steps, and his friend Joseph Severn, who had accompanied him to Rome, brought him to this cemetery. The verse on the stone refers to the negative reviews his volumes of poetry had received. He was recognized in his life only by friends, other artists – Byron, Shelley.

Yet the sweet converse of an innocent mind,
Whose words are images of thoughts refined,
Is my soul's pleasure;

Severn later buried a baby son here by Keats, a boy who died in a crib accident. Strange how those still happen today, while the deathly force of tuberculosis, which killed so many more, has been so greatly reduced by antibiotics. Then Severn himself was placed here. The guidebooks never seem to explain the connection with the baby, but it’s clear that much of Severn’s heart must have stayed here. The site is no more than fifty feet from a busy bus line, but peaceful behind a high wall. 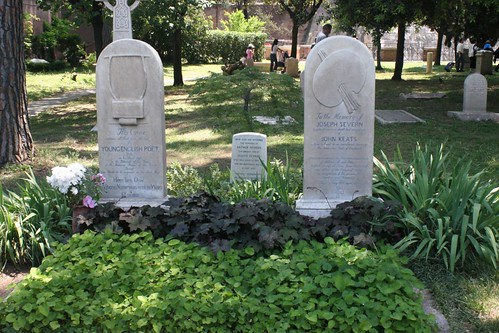 As time was rapidly running out on my visit, I clipped through the cemetery to find Shelley’s stone, under a ruin of a tower in the city wall. Shelley died in a boating accident, also before his time. Then a donation for the caretaking, and another coin for the cats, and out on my way.

A metro ride across the city is the National Etruscan Museum, in the Villa Giulia. This is quite an amazing place. Two large floors packed with artifacts, countless Etruscan and Greek ceramic pieces, some incredible bronzes and terra cotta sculptures, and a recreation of the facade of a temple.

The Etruscans are often called “enigmatic” or “mysterious”. The truth is we know quite a lot about them – really more than any other contemporary group in the area except the Romans and Greeks. They spoke a non-Indo-European language, but wrote with a Greek script borrowed from Euboea. So we can read their inscriptions, and know the meanings of most of them. The problem is that they’re mostly funerary in nature. The Etruscans are an entire people whose lives are known to us by the manners of their deaths and burials. 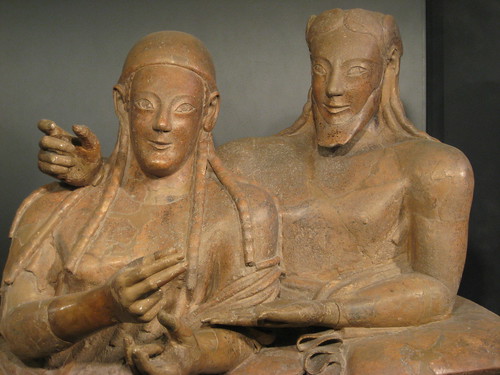 Perhaps the most famous Etruscan sarcophagus, of terra cotta. Photo by Small, on Flickr. Creative Commons.

So much Etruscan pottery has been recovered that it is possible to trace the styles of individual painters. But we know the names of only a handful. Most are known by pseudonyms such as the “Priam painter”, generally after a theme or a necropolis where their work is found. A tear came to my eye as I read what was known about an apprentice of one of the master painters, whose urn was used to hold the remains of a young woman cremated with a dove. 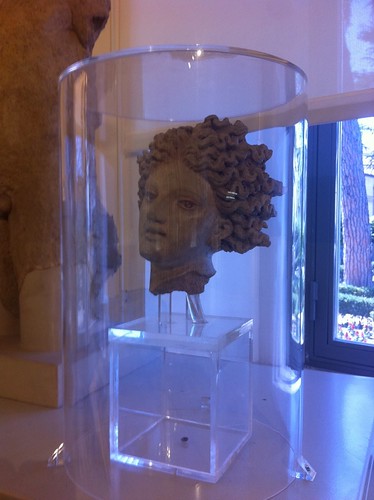 Well, this is kind of random, but it's the only picture I took inside the (no photos allowed) museum. I just really liked that terra cotta head. The mouth was perfectly sculpted.

It is not the distance of time that touches me about these people. I study bones that are tens or hundreds of thousands of years old, distances so vast as to be unimaginable in human terms. Yet the bone persists. The individual is marked in it, and touching her bones creates an immediacy of connection, like traveling through time.

It is not the distance of time that affects me. It is the anonymity, the artistry denied a name. No different from the painters of Chauvet or Altamira – but the Etruscans lie less than a tenth the distance in time. But then I think of young Keats, less than a tenth the distance to the Etruscans, who willed himself an anonymous stone, marked only with, “Here lies one whose name was writ in water.” A name is an eddy in the river of time.

After I passed a nice afternoon in the museum, I hopped back on the Metro to Piazza Barberini. This piazza has a small fountain in the corner, adorned with bees. 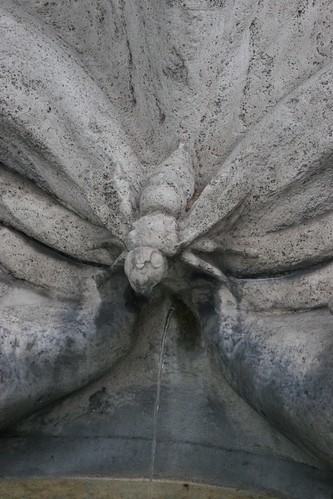 I think this must be symbolic of something, but I'm afraid to find out what.

Just past the fountain is the church of Santa Maria della Concezione dei Cappuccini. Beneath the church, but a climb of steps above the street, is the famous Capuchin Crypt. In a few rooms are the bones of many hundreds of brothers of the Capuchin order. These bones were disinterred and arranged as a kind of contemplative art upon the walls of the crypt. 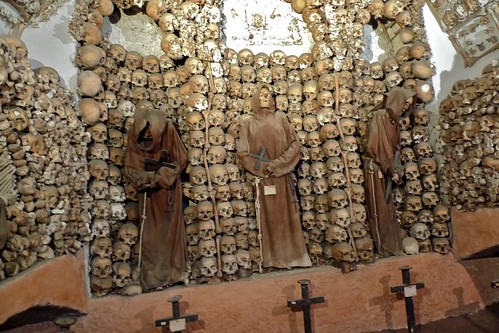 In the Capuchin Crypt, photo by Darren and Brad on Flickr. Creative Commons. No pictures were allowed in there, either, but several Flickr users seem not to have heeded the signs. Thanks, Creative Commons!

There are six rooms here open to the public, five of them with different vignettes of bones or, in a few cases, mummified remains. The final room of the crypt has the usual bony ornamentation, in addition to the complete mounted skeletons of three children. This is where I encountered any anthropologist’s nemesis: A blowhard who thinks he’s some kind of forensics expert because watched one too many episodes of “Bones”, or whatever the British equivalent may be. This guy’s nonsense was clearly audible throughout the entire crypt, as he pontificated to an appreciative klatch of clucking hens.

“It must be a dwarf,” he said. “Look how small the pelvis is. Yes, certainly some kind of dwarf.” 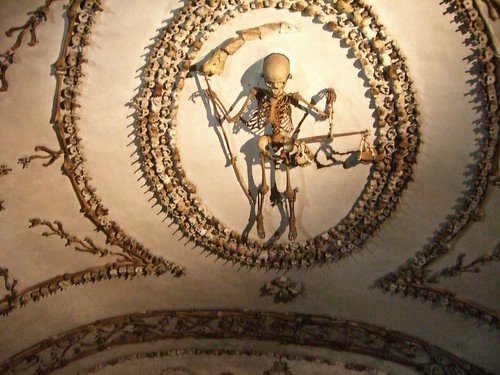 I don’t usually make it my business to correct Cliff Clavin types, but his voice just carried through all six chambers. “No,” I quietly said, “it’s a child’s skeleton.”

“How do you reckon that?”

“I’m an anthropologist. It’s not my first crypt.”

The floating grim reaper had two little friends at the far end of the chamber, all three children of a noble family that had been entrusted to the friars after their deaths. 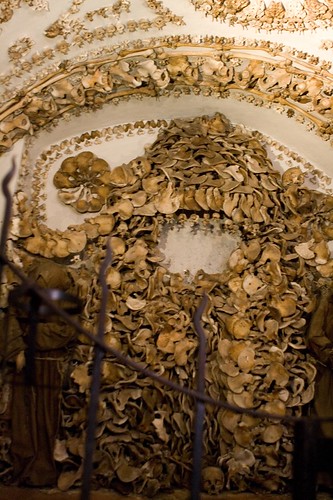 The five rooms of the crypt with bones also have dirt floors with obvious burial mounds in them. The dirt was reputed to have been brought from Jerusalem when the Capuchin order occupied the church, but I figure by now decayed human flesh must be the majority component. Even so, there’s nowhere near enough graveyard in this crypt to have supplied the bones. Most of them arrived by cartloads from the original medieval home of these Capuchin friars. That may explain the curious shortage of finger and toe bones in the decorations. I mean, seriously, there must have been thousands of hip bones (every human has two) but remarkably few phalanges (most people have 56). Oooh – and I saw hundreds of atlas vertebrae (every human has one), but I don’t recall a single hyoid (every human has one). An interesting case of taphonomy.

I spent a good long time in each of the rooms. These monks may not have joyfully embraced death, but they used their devotions to remove some of its sting. I was interested to see the number of long bones that still had visible epiphysial lines, an indication that some of the brothers had died in their teens or very early twenties. Not surprising in a medieval context, a reminder of the ever-present possibility of death in these communities.

Keats lived those final months a short walk from the Capuchin friars who tended this church and crypt.

By the time I left, the sunny day that started at the cemetery gate had turned to rain. So I popped on my headphones and caught the bus back to my home base to get some work done.