I’m visiting at the Institute for Human Evolution at the University of Witwatersrand this week. Lee Berger has been a really wonderful host and among other things he very kindly took me out to the Malapa field site. As you can imagine, I’m pretty busy this week and haven’t even had time to properly work up my thoughts on my Siberia trip. But I thought it would be fun to quickly share some impressions and photos of Malapa.

Malapa is a short drive from Johannesburg, but it takes only a short drive to really be in almost total wilderness. The site lies in what is now called the Malapa Nature Reserve (after the site) and adjoins the John Nash Nature Reserve. We arrived at the gate around 7:00 am, just after the orange full moon set in the west, and as the sun was rising in the northeast. It was a beautiful morning, no question. 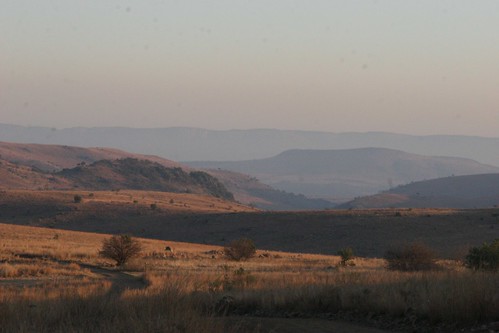 We met Zach Cofran, a graduate student at Michigan, as well as a local painter that Lee has contracted to document the landscape before they construct a temporary shelter and begin systematic excavation at the site. This made for a pretty great opportunity to take in the surroundings, as we scoped out various overlooks on the area. Here’s an overlook above the Malapa site itself: 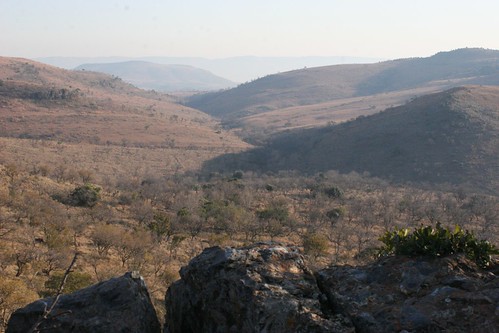 Those rocks foreground are masking a steep pitch down, we were on a pretty tall hill.

The valley winding into the background is the Malapa drainage. Most of the dark green patches of trees are associated with some kind of karstic feature, either current caves or old ones that have largely eroded out. The landscape is really alive with cave formation processes – the streambed itself drains into an extensive cave system and eventually emerges on the opposite side of the near hills.

We drove down from here along the track into the valley. Lee showed us the ranch house that will house a field school, and took us down the river track (sometimes actually in the streambed) to the site.

I would describe Malapa itself as a former cave. There is still a deep pit element, enhanced or largely created by blasting in the early twentieth century. Miners went prospecting for flowstones and other calcium carbonate features in caves, which they could reduce into lime by burning it in kilns. To get the stuff out, they had to blast through a lot of breccia – essentially cemented sediments and debris that collect inside of caves. The breccia often contains bones of ancient animals, including in some cases hominins, sometimes very densely. At Malapa, the breccia is exposed at the surface, partly obscured by the miners’ activity creating a road track along which the exploited other caves further up the hill. 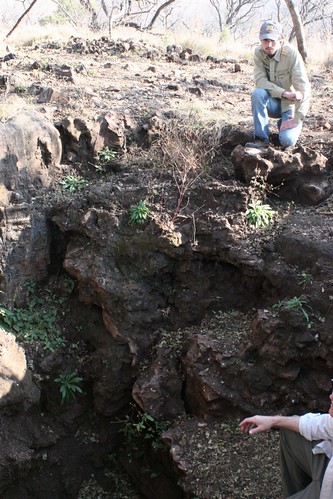 That’s Zach Cofran on the opposite side there.

The skeletons recovered thus far were found in surface blocks of breccia blasted out of this pit and in the edges of the pit itself. The breccia however extends over a much greater surface, making this an incredibly promising site for further excavation and discovery.

Well, it may not look like much in photos, but in terms of hominin fossils, it may end up being the most important fifty square meters in the world. 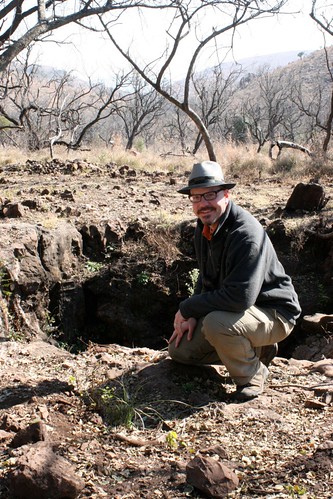 I’m almost ashamed to admit that after much turning over of blocks, I didn’t find any hominins. At least not any that haven’t already been found by somebody else first. But we had plenty left to see. A drive up a further track would take us to some other very interesting places. Lee drove us to the spot where the river comes welling back up out of its cave system – as he described it, the water exits 75 years after it first enters. Here he is with his ridgeback companions: 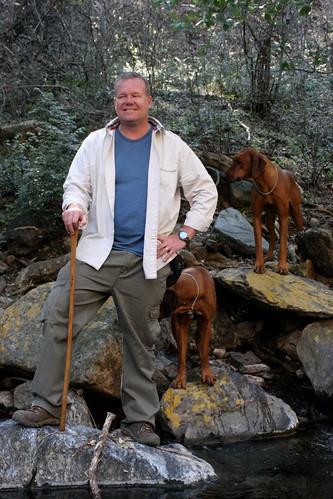 After some geology I won’t describe, along with an empty leopard den, we continued onward encountering many of the other species of large mammals on the nature reserve. Luckily, I use a Canon body so I could borrow the 400 mm telephoto lens to get some great shots. There were plenty of wildebeest: 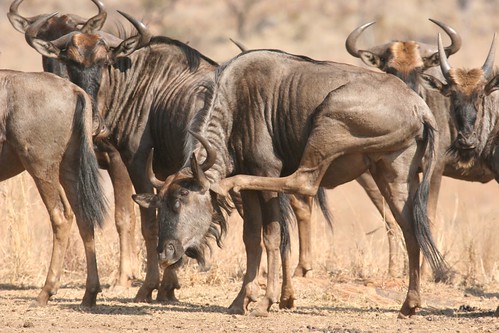 And some giraffes (for Goodwin!): 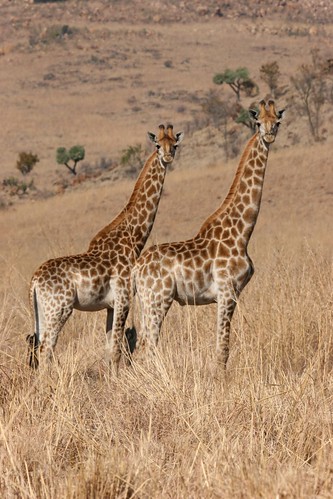 And a kudu bull with a wonky horn: 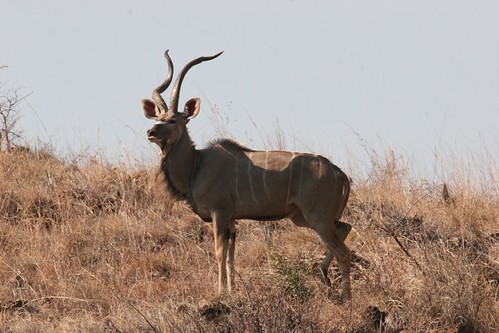 Now, in my ordinary life I really have few occasions when a long lens would be very useful, but I could get used to having one for these situations.

Near the end of this little safari, we hit Gladysvale Cave, which has a very impressive large upper gallery and two lower ones we didn’t enter. Lee worked Gladysvale for many years finding a handful of hominin remains but endless antelope bones. 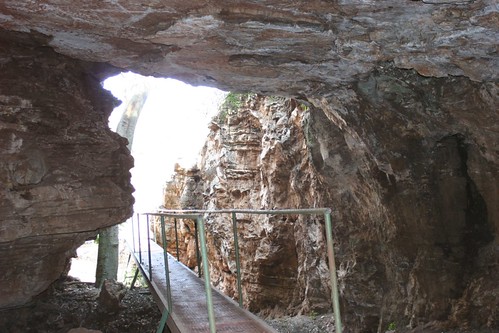 It’s a problem with field sites – the hominins are only a part of an ancient landscape which was occupied by many species. Our relatives were patchily distributed, but they did end up in caves sometimes due to several different causes. The skeletons in Malapa are remarkably complete, suggesting a distinctive history of formation of the site. Large sites may be made up of many such episodes.

As for Gladysvale, it is still actively used by large herbivores, whose tracks go right into the cave. They may be seeking minerals, as there is no water pool inside.

This was near the end of our drive, and so I’ll stop the story. Again, I’ve got lots to see ahead of me this week, but hopefully I’ll have some Denisova news typed up soon.