Today I visited Down House, Charles Darwin’s home southeast of London. Mark Pallen, my gracious host from the University of Birmingham, brought us to the house, where we met Randal Keynes. Also on the trip were Brown University biologist and author Kenneth R. Miller, and Captain Ben Kirkup of the Walter Reed Army Institute of Research. 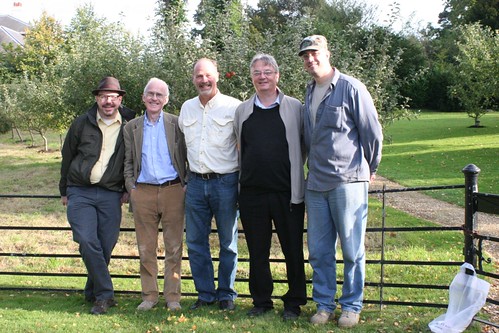 Keynes is a great-great grandson of Charles and Emma Darwin, and the author of the book, Darwin, His Daughter and Human Evolution, which became the basis for the movie, “Creation”. Hearing from a true family expert on Darwin’s life, family and experiments made this trip truly a once-in-a-lifetime experience for me. 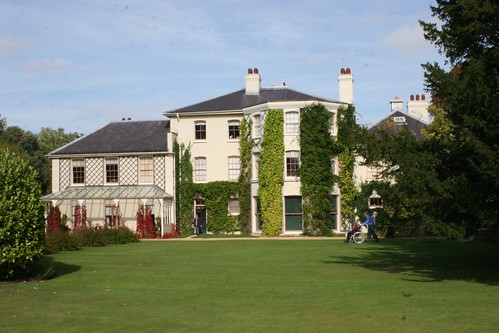 The house is quite lovely. It sits on bedrock of chalk, and locally flint nodules are such common fieldstones that they’ve been built into walls – and memorably, the church in the nearby town where the Darwins attended. The house was owned by the family until 1909, became a school for several years, and was then converted into a privately held museum. It was acquired by English Heritage in 1996.

At the time of its restoration, family members gathered together the original furniture of the lower floor, and the museum used photographs to restore these rooms to their appearance during Charles Darwin’s lifetime. Here is the drawing room: 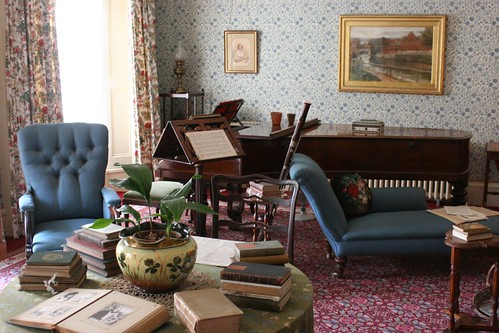 The flowerpots on the piano recollect the experiment in which Darwin demonstrated that earthworms do not respond to sound from musical instruments (note the nearby bassoon), but do respond to vibrations in the soil (when the pots were placed upon the piano itself).

There are several rooms on this floor. The most notable is Darwin’s study: 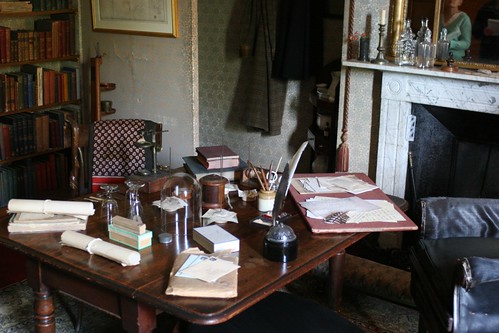 Darwin used the single lens microscope for dissections. I wish I’d gotten a picture of the short wheeled stool that he used here. The billiard room is full of portraits, including this famous one: 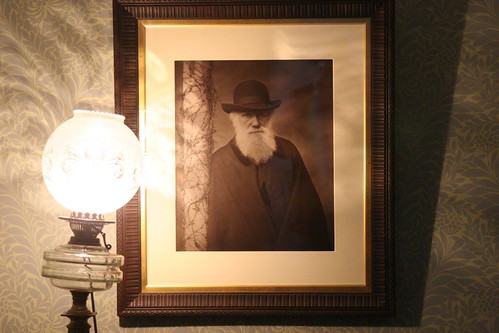 The column here is on the veranda, and as Keynes noted to us, the plant trailing up in the photograph was Virginia creeper, now planted outside and showing its beautiful autumn red color: 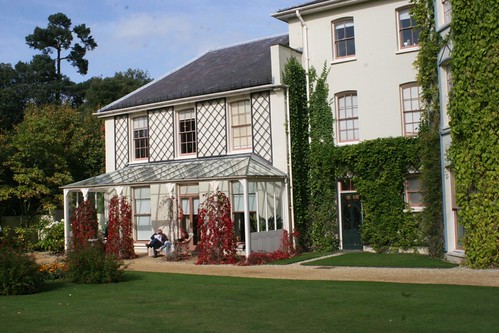 The upstairs of the house contains several interpretive exhibits, including some original manuscript pages, artifacts from the Beagle and from Darwin’s life at Down House, and a display remembering the death of Charles and Emma’s daughter, Annie, at age 10. Adjoining the original house is a small tea room, with an outdoor patio and modern toilets.

Like the downstairs, much of the grounds has been maintained in its appearance during Charles Darwin’s life. Several of his ongoing experiments are being replicated – a patch of unmown grass where Darwin counted species of plants; a millstone in the ground with a device for measuring the compaction of the soil by earthworms. Fresh worm castings were all over the lawn: 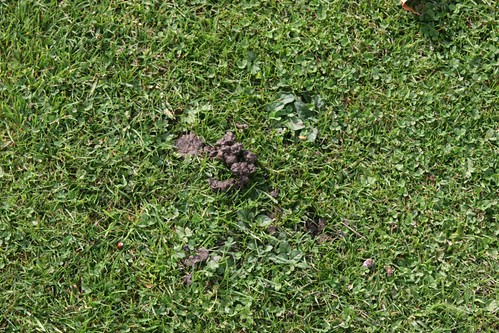 The kitchen garden is still planted, although in this season not especially lavish in its growth. Flanking the garden is a zoned greenhouse, with various tropical plants including a room full of carnivorous ones. 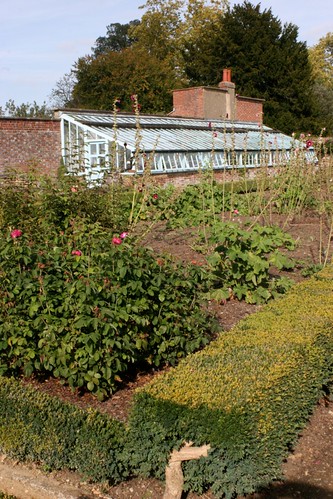 At the rear of the property runs the famous Sandwalk, where Darwin walked five laps around the gravel path on a typical day, marking his laps by nudging stones. Keynes’ descriptions of the childrens’ experiences with their father in the yard, some conveyed through the family, others hinted by Darwin’s writings, were joyful. 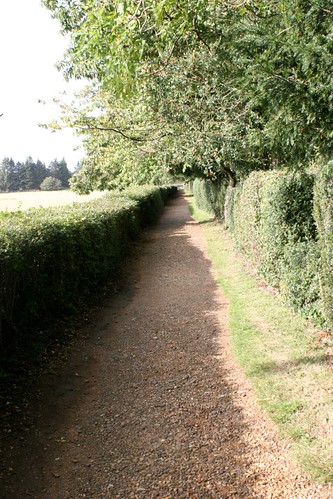 Tonight I am in Malvern, where Charles took both himself and his daugher Annie for the water treatments. Annie died here, and after a late supper we walked through the darkness to visit her grave in the town.

But I’ll leave remembering a happier note, with many more stories to tell than I can share here: 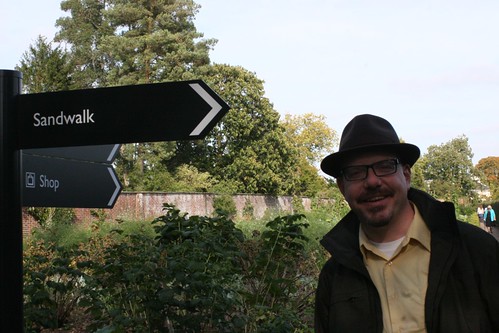